What are Polyclonal Antibodies?

Polyclonal antibodies (pAbs) are a heterogeneous mix of antibodies derived from B cells in the adaptive immune system. In contrast to monoclonal antibodies (mAbs) that all recognize the same epitope per antigen, pAbs recognize multiple epitopes on a single antigen (Figure 1). The use of pAbs is advantageous due to the heterogeneous binding of pAbs, producing higher sensitivity ranges than mAbs across many applications. 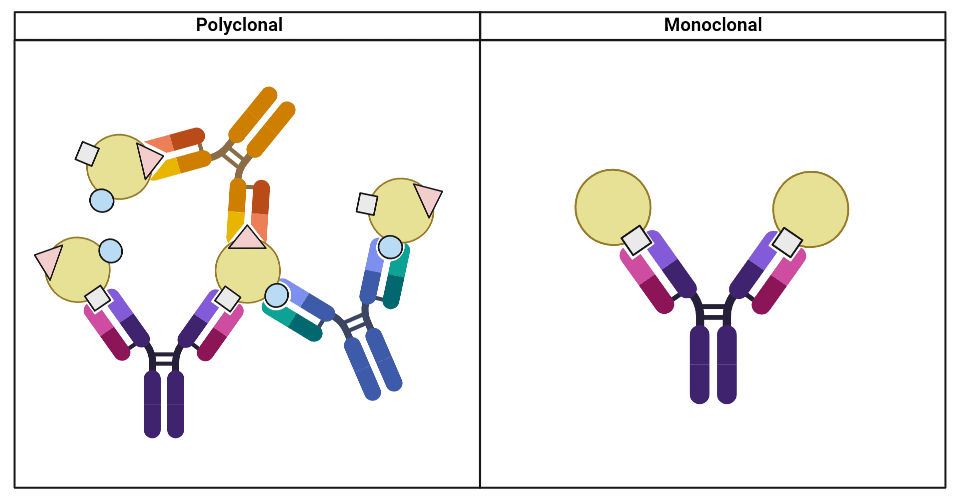 How are Polyclonal Antibodies Produced?

B cells provide specific and long-lasting immune protection against foreign pathogens. Activation of B cells is initiated through antigen binding to the B cell receptor (BCR). BCR activation elicits intracellular signaling pathways that result in B cell proliferation and differentiation. Each differentiated B cell produces and secretes a large amount of a single antibody clone with a unique antigen-binding site (Figure 2). Most antigens are complex and present multiple epitopes that lead to a polyclonal antibody response. The process of pAb production involves immunization of the host species with an antigen to induce an immune response. The antibody response is monitored by evaluating blood samples, and purifying the serum against the antigen and protein A / protein G to obtain a polyclonal mixture of antibodies. There are several factors that need to be considered during pAb production: preparation of the antigen, host species selection, injection protocol, collection, and purification.

Preparation of the Antigen

The quality and quantity of the antigen is a critical consideration to obtain specific antibodies against the antigen and not against sample impurities. The quantity of injected antigen also needs to be considered to induce the appropriate immune response, avoid suppression, sensitization, and tolerance to the antigen.

When selecting the host species, the amount of pAb needed, ease of blood collection, and phylogenetic relationship between the antigen species and animal species are considered. Rabbits are a common host species, however when large amounts of pAbs are required, animals such as sheep, goats or horses are an option. Ensuring a larger phylogenetic distance between the antigen species source and the host will result in a better immune response. For example, a mouse will not easily produce antibodies against a mouse-specific antigen.

Important considerations to make with regards to the injection protocol is the route of injection, volume of injection, and boosters. Various injection routes, such as subcutaneous, intradermal, intramuscular, intraperitoneal, and intravenous have advantages and disadvantages for pAb production and animal welfare. Booster injections may improve antibody affinity and can affect the induction of memory B cells.

Monitoring the antibody response is performed by obtaining blood samples from the immunized host. Frequency of blood collections and maximum collected blood volume are critical considerations that depend on the host species.

Biophysical and clonal diversity of pAbs is advantageous in the research environment. Polyclonal antibodies provide greater stability against changes in the environment, such as temperature and pH that can cause inactivation and precipitation of antibodies. The multi-epitope binding capabilities of pAbs allows for robust sensitivity in various immunoassays. While mAbs are commonly utilized in various in vitro assays, pAbs can provide greater sensitivity ranges. In enzyme-linked immunosorbent assays (ELISAs), pAbs detect multiple antigen variants or epitopes present in the analyte, which is particularly important when observing natural variances in human donor samples. In chromatin immunoprecipitation (ChiP) assays , pAbs can recognize multiple epitopes on the target protein and circumvent issues regarding epitope masking by cross-linking.

Polyclonal antibodies display benefits in therapeutic applications as well due to their multi-epitope binding capabilities. pAbs offer broad strain protection and reduce the likelihood of ‘escape variants’ that are no longer recognized by the antibody. Additionally, the polyclonality of pAbs mimics that of the natural immune system and may be more effective at viral and toxin neutralization and eliciting effector functions. The use of pAbs for anti-tumour immunotherapy has potential to be more efficacious than mAbs in mediating effector functions and inducing cancer cell apoptosis.

While pAbs are an invaluable research tool and show promising results for diagnostic and therapeutic use, they come with associated challenges. Limited supplies of pAbs become exhausted due to the nature of their production, which requires the new batches of pAbs to be generated. This results in batch-to-batch variability as reproduction requires a similar immune response from the host – it is inevitable that the producing animal will eventually die. Variations can result in cross-reactivity, poor binding affinity and avidity, which results in data irreproducibility. Data reproducibility is a major pitfall in antibody technology, which undermines knowledge production and delays therapeutic drug development.

De novo protein sequencing is a well-established mass spectrometry-based technique that determines peptide sequences directly from the mass spectral data. Rapid Novor is the first and only team to successfully sequence pAbs using mass spectrometry, without reference to nucleotide sequences. With our polyclonal antibody sequencing service, a pAb mixture can be sequenced to secure robust mAb clones for recombinant antibody (rAb) expression (Figure 4) and recapitulate the polyclonal response and eliminate batch-to-batch variability.